Rendering in the Revit Family Editor 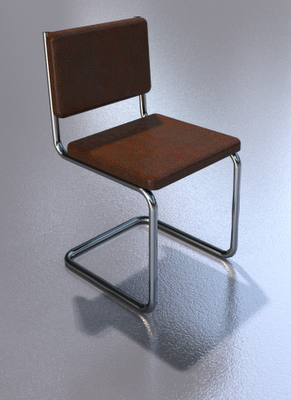 Mental Ray rendering in Revit is not available in the family editor, and this can be vexing. However, this doesn't stop 3rd party API developers. Accurender built the nXt rendering engine as a plugin for Revit that seem to work in all 3d environments, including the family editor. Of course, it isn't as tightly integrated into the Revit platform as Mental Ray, and it isn't as fun to watch (those little orange buckets are absent). It actually really bums me out that they decided to make a photoreal renderer for Revit, as Mental Ray pretty much has that covered. What would be great would be a Penguin non-photoreal rendering engine. But there are a few other things to be said for this plugin that go beyond what MR offers:
Caustics (refraction and focusing of light passing through thick transparent materials, nice for aquariums and wine glasses)
Custom and preset HDRi skys
Background images
Fractal Plants
Assignment of daylight portals
It seems to be much slower than MR, but comparison in these things is not always clear. It does have a harder time as you add more geometry (MR is largely indifferent to how much geometry is in the scene). However, like Maxwell, it is also progressive: it can render on and on if you like, or you can just stop it and save out a finished image if it looks good enough. The interface is nicely streamlined and is pretty easy to figure out, although most materials seem to require some amount of customization.
Another plus is that is seems to be a really "out of process" renderer. After you kick off the render job you can work in the same Revit file while the image is created in a seperate window (providing you have a beefy enough machine, it seems to do OK with my no-so-fancy laptop).
I've only opened up the plugin a couple of times and made a few images, so take this review with a grain of salt. Because I'm familiar with Mental Ray and have workarounds for some shortcomings, I'd be hard pressed to pony up the money to buy this plugin. But depending on your workflow, the few features I have mentioned might make this plugin worth a look. Check out the 30 day trial version yourself and send in your observations. 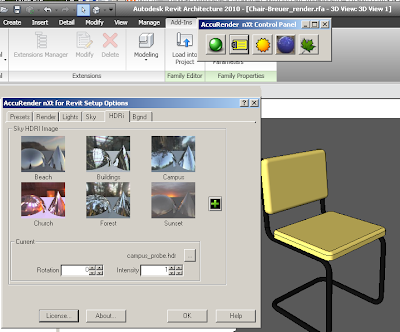