And you thought you were sooo original . . . 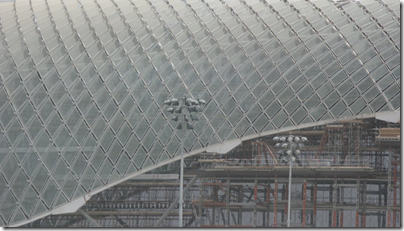 An interesting discussion is going on concerning Evolute’s patent on freeform surfaces in buildings consisting of planar quadrilateral or hexagonal faces. This isn’t a patent on the process to create them . . . it’s for the whole category of resulting built forms. Check out the summary of the patents here (and don’t be afraid to read the full patents too).

What do you think? Look at the forms below, do they count? If there is math underlying the form, is it freeform? Have you made something that qualifies?

J. Gribl’s Hippo House, Berlin, with Schlaich Bergermann and Partner, 1996. While it looks organic, is this “freeform” ? It’s actually a “translational surface”, so I’m not sure if it qualifies.

Some Gehry . . . surely freeform, but not planar, just expensive. 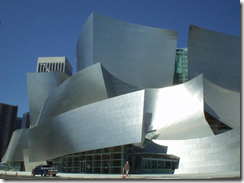 Eladio Dieste, Church circa 1960. Nice and wiggly with many many flat quad faces. But actually they’re ruled surfaces, and there isn’t a support structure. 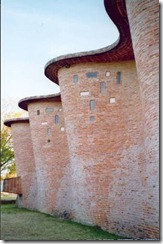 A patio in Massachusetts, circa 2005. Probably the closest example of freeform with planar quads, but again no support structure. 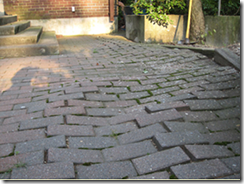 In the end it isn’t so much about proving pre-existing art (are there examples between 2000 and 2007 at least?) but is it CONCEPTUALY o.k. to patent built forms? Isn’t it more appropriate to patent the process that attains the geometry? But what if the inventor of the Television patented the process of creating the TV, rather than the outcome? And what is “freeform”? Are there any precedents for this specific kind of building pre-2000? 1990? 1900? Are we able to separate “CAN you patent that?” (which is a legal question) from “SHOULD you patent that?” (which is a philosophical question).

I don’t have the answers to this, my gut tells me something isn’t right with patent law . . . but I also don’t think the implications are obvious. What do you think? 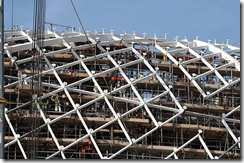