Welcome to Part 2/4 of our guest series of posts by the illustrious Joe Kendsersky. Find Part 1 here., Part 3 here, and Part 4 here.

Before getting into some workflow examples, we should set some ground rules of what cannot be accomplished when creating building forms or components.

· You will not be able to manipulate imported geometry from either program. The forms / components are contextual references in which you are working with or off of.

· You will not be able to parameterize forms / components after importing and no metadata will be transferred.

· Tip: Refer to the document from McNeel’s site: Exporting Solid Geometry from Rhino to Revit which provides some great tips to make sure your geometry is optimized before importing.

Let’s imagine two team members are working on a design competition and want the ability to quickly iterate several schemes for a project. One member is Rhino / Grasshopper savvy, but does not know Revit and does not understand the components of assembling a building. The other member knows Revit Architecture and is a seasoned architect. How can they leverage both solutions and work together?

1. To start off, the Rhino team member should set units and determine a common origin point to begin modeling. I recommend starting at 0,0,0 for consistent base point and to make sure the object is not shifted – especially when linking and using Revit’s Mass / building Maker tools. It also makes it easier when passing data to other applications or to consultants.

2. In Rhino / Grasshopper, create a form, you will have to "bake" the form before exporting it and “join” if the form is made up of multiple surfaces - this will create a single object. 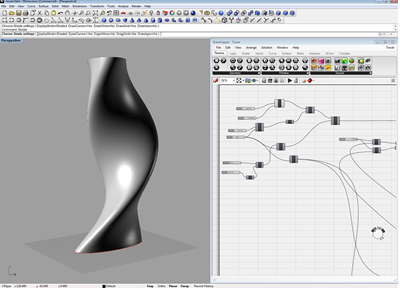 4. At this point, the Revit team member will link the form into a Revit project. The workflow: Rhino export .sat > create an in-place family mass and link .sat. The advantage of using a mass in-place family will allow you to overwrite existing .sat files in Revit to study several different iterations, if the Rhino model changes. However, you could export using default .sat option in Rhino and import directly into a loadable mass.rfa family file.

5. The Revit team member will start a new Revit project and create an in‐place family mass. Go to the Insert tab and select Link CAD. Select the .sat and make sure the correct units and positioning are set. Note: Link CAD is activated when in‐place mode, this little gem slipped its way into Revit Architecture 2010 and has many benefits. 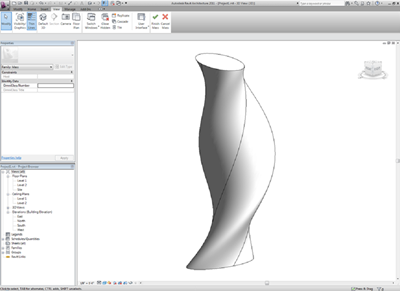 7. After the .sat geometry is linked, the Revit team member has two different avenues to pursue to create buildable architectural components. They can either apply Revit’s Patterning tools and set curtain panel components to the surfaces, or use Mass/ Building Maker tools to apply default wall system families to the surfaces. Each method has its own strengths and weaknesses’ (For further resources / discussions’ on these workflows also Dave Fano’s Blog DesignReform). Note: A straight import will give you UV coordinate spacing, but this may not be what you want. Therefore, depending upon the layout of your wall system, you may want to use the new Intersects tool to divide the surface by using intersecting 3D levels, reference planes or model lines. The Intersects tool will allow you to create a cleaner relationship between the mass and other building elements, such as floor levels and surrounding context. 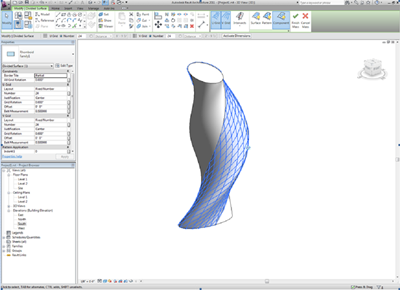 8. With the imported geometry, the Revit team member can create mass floors at each level defined by the mass and make a schedule to review floor areas - per floor. This looks good, but now they would like to study other forms for comparison – what can the team do? 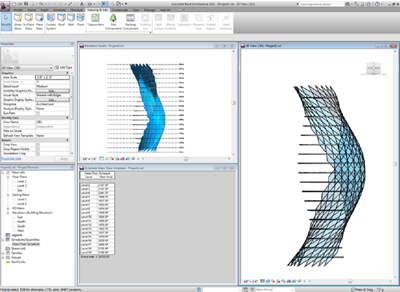 9. The team members will follow the same routine from starting from point 2: In Rhino or Grasshopper re-edit the form and export to .sat > and finally in Revit Architecture reload the link and update the existing imported geometry – if the same .sat file name was used. Another option is to save the existing work and create a new Revit project, this way they can refer back to the different options. Note: Also, Revit’s Design Options feature could be explored, a team member could place several mass forms in their own option set / options, for more information on Revit Design Options see Help Documentation.

10. In Revit, the image on the left is the original shape before reloading the linked .sat file. Image on the right is the new form; you’ll notice the divided surface and curtain panel component have been remapped. Note: remapping of divided surface, floors and walls may not always update and you have to reapply - this is dependent on how much the linked geometry has changed. 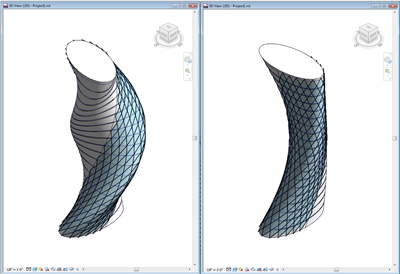 Also, note that the mass floor schedule has updated to the changes made from the new linked geometry. In this workflow example, we have demonstrated how a team can leverage both solutions: Rhino & Revit Architecture, to quickly come up with several schemes at the conceptual / schematic level and utilize the tools in both applications for the exploration of several building forms and understanding the floor areas for each building form. 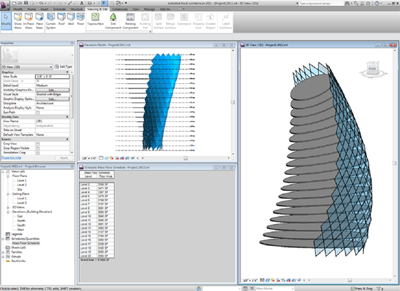 In the next post, we will discuss creating components in Rhino for use in Revit families.

Joe Kendsersky is an Autodesk Green Beret who gets parachuted into customer offices to smooth over the bumps on their road to BIM victory. This job is also referred to as “Customer Success Engineer for Revit Architecture”. One of his major roles is to insure the success of new and existing customers as they move from pilot to production and provide Autodesk with deep insight into product usage and customer experience. Joe is trained as an architect and joined Revit Technology in 2000, and subsequently Autodesk in 2002. Since switching into the software industry, he has continually worked to aide in the development of Revit and enjoys sharing new knowledge with all users.