Where to begin to talk about Blender . . . Blender is an open source 3d modeling and animation package. It's one of those free applications that is both free as in "information must be free" and "free beer". Jeff McGrew calls the learning curve a “vertical wall”. Still, once you get inside a couple of it's features, it's a simple and satisfying application. The sculpting capabilities are lovely. Using a similar toolset to Mudbox, a user can push, pull and model a 3d shape like a lump of clay. I know a lot of people say that about different apps, but you really can say this about both Mudbox and Blender. I'm going to talk more about Blender because - unlike Mudbox - it has a dxf export option, which allows you to go directly into Autocad.

Because both apps use meshes to model, they don't work well with Revit. Meshes are surfaces made of polygons, not something you can slice up into floor plates, or make into walls. For reasonable walls, you need nurb surfaces, and to cut floors you need solids. This makes a Blender element twice removed from Revit usability. But these meshes are VERY pliable, and in just a few seconds, you can make anything from a fish to a biomorphic skyscraper.
Meanwhile, the geniuses over at the Autodesk Shape Manager lair have done something wonderful. They have stirred their magic cauldron and boiled some batwings and put some special sauce in Autocad 2010 that can CONVERT these meshes into NURB solids. Now, mind you, this was designed to convert shapes made in Autocad 's new organic modeling features into elements that play nicely with solid nurby applications. But you can throw all sorts of junk at the converter and get some very sweet results.
One major caveat to what is otherwise a love sonnet to the ASM team:
The converter LOVES subdivided surfaces made from cubes. Most other things, not so much.
Here's a smoothed pyramidal mesh made in native autocad geometry (left) that is converted into a solid (right).
The slices represent the new NURB patches that are used to sew together the new solid 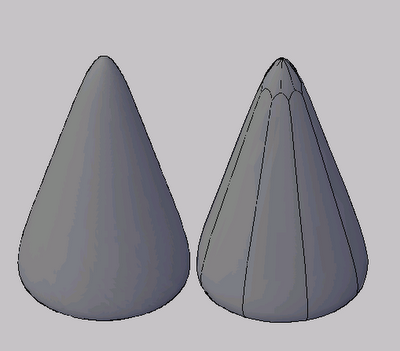 Pretty, but I don't know what I'm going to do with those surfaces. I predict we are going to see a lot of student work that feature these distinct shapes, just like we saw lots of models that saw “opportunities” in the burnt edges that came as a by product from the early days of laser cut basswood.
Back to our non-standard workflow: This is essentially 6 square patches that have been massaged into a new shape in Blender (please see the earlier link to becausewecan.org to see how to get here). 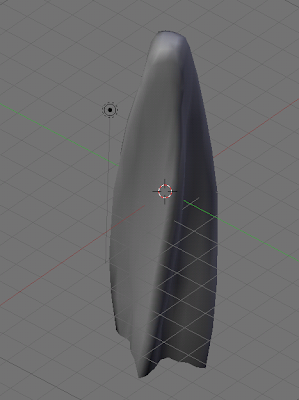 Export it to DXF, import into ACAD 2010, explode the block. The ASM solidifytron recognizes the underlying architecture of the form and creates a solid that is made of 6 nurb patches (imported DXF from blender on the left, converted solid on the right). 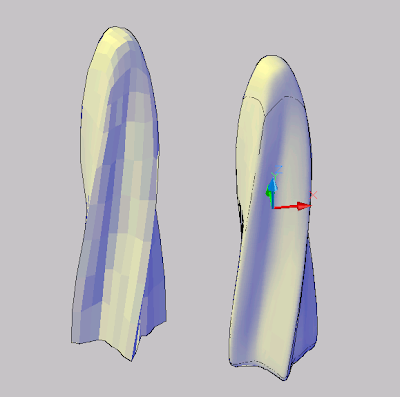 This solid can now be imported into Revit and used to make walls, curtain systems, and other Revit features. Perhaps most important: it can be used to make mass floors. So the big goofy topedo can now be a QUANTIFIABLE big goofy topedo: 58 floors, and 961,796 sf. [Note: terminology has been edited to say "torpedo" as previous wording seemed to attract a barrage of automated spam. Pesky interweb.] 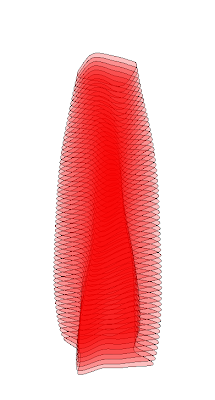 And then you can do the fun part of hanging curtain walls, dividing surfaces, and rendering.