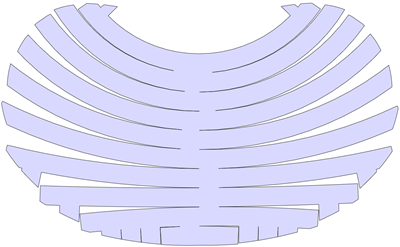 Because she is awesome, my wife got me an awesome birthday present: an E-Craft electronic die cutting machine.  The target application of this tool is scrap booking, and the machine’s marketing boasts that it can cut sheet magnets and glitter paper, AND it comes in pink and periwinkle blue.  None of these features seem to scream Architecture, Engineering, or Construction.  Our (AEC) people seem to favor the white, the black, tiny glasses, and bowties.  And NO GLITTER.

Our people are, of course, no fun.

So what IS an electronic die cutting machine?  Similar to a pen plotter with a knife blade, I’m using it like a poor man’s laser cutter.  You feed it an SVG file, and it will cut whatever the hell it is, out of whatever you feed in the front (thin stuff, within limits).  You certainly can’t build ANYTHING, it isn’t a 3d printer.  But it’s actually more interesting, IMHO, because it forces you to build certain KINDS of geometry.  Stuff that can be folded, bent, creased perforated, poked, scored, and cut out of flat material.

(Hmm . . . does that sound like a reasonable limitation for lots of kinds of architectural construction?)

For today’s exercise, I will construct Sir Norman Foster’s toroidal masterpiece, the Copenhagen Zoo Elephant House.  Because the universe demands symmetry, I will cut it out of a donut box. 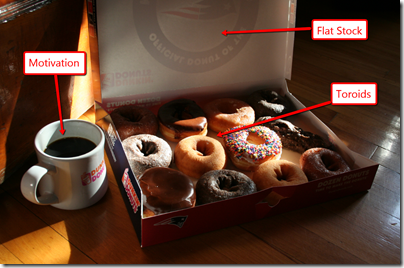 The workflow to get the cut pieces involves Vasari (or Revit, which needs the STL Exporter addin), the open source vector art editor Inkscape (and a plugin extension from Evil Mad Scientist’s Eggbot), the papercraft application Pepakura, and a papercutter (this can be scissors, a lasercutter, an intern, or the Ecraft tool I’m using.)  Pepakura will run you 38 bucks (totally worth it), the rest are free. 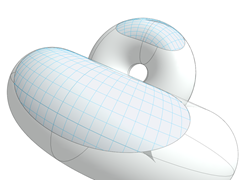 While there are some more exotic methods to create flattenable forms (see this, and this), I’ll start with the method Sir Norman often uses of dicing up rational primitives.  For the details on this process, check out this post.

Once the surface has been divide, populate the divided surface with a simple surface.  That is, make a new curtain panel with just one surface and load it in. 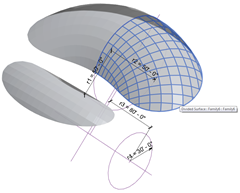 More details on this part can be found here.

Step 3: Export to Pepakura and Unfold

Once I have my panelized form, I isolate the pieces I want (either using temporary hide/isolate or visibility graphics) and export using STL export (either native to Vasari in the add-ins tab, or as a plug in for Revit).  For this kind of form, I like to also send out the “floor” of the form even if I’m only interested in the roof, as it helps keep the roof shell from spreading out.

Import the file into Pepakura

Again, more details on this process can be found here.

Once I get the panels into Pepakura, I just hit “unfold” and get the geometry needed for cutting. There are lots of little bitty edge pieces that I just throw out, but otherwise, I’m good to go.   For this kind of form, I also like to turn OFF the default behavior to make “tabs” as they just get in the way. 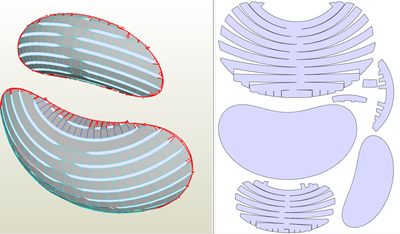 My cutting machine only takes SVG files, and Pepakura doesn’t make ‘em, so I need to do some data wrangling.  I output to EMF, which is a vector format, and open it up in the open source vector art editor Inkscape.

While I’m in Inkscape, I like to use the a little tool provided by Evil Mad Scientist for their Eggbot printer called Reorder Paths for Speed.  What this little delight does is take your jumble of lines and puts them in order using a traveling salesman algorithm.  If you don’t use this, your cutter will jump all over the place drawing lines in the order they were created.  Using this plug in makes the cut time way more efficient.

(If your shape is relatively simple, and you have Autocad, you can use the “boundary” command to recreate the shape, which has the result of making the cutting process continuous rather than skipping around.  But as far as I know, Autocad doesn’t make SVG files)

Now we are ready to save to an SVG file and import into the E-craft software. 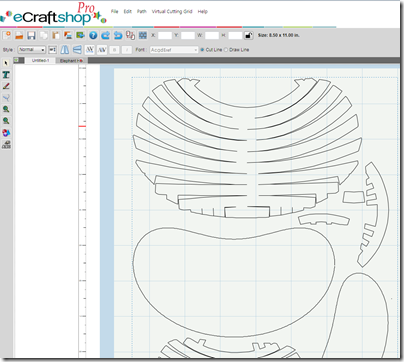 The capabilities of this layout tool are pretty limited, so you really need to be ready to go before importing your SVG.

Before printing, I need to trim up my donut box a bit 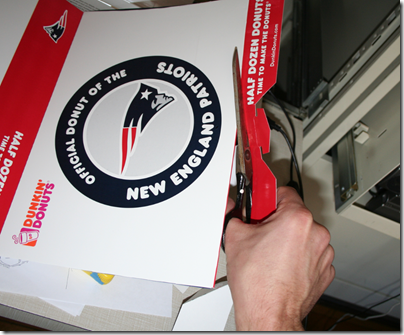 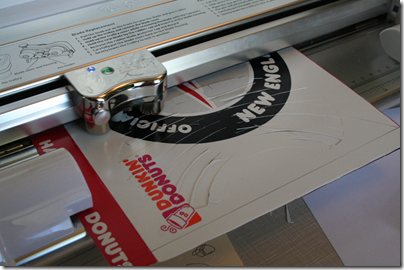 Pop out the pieces 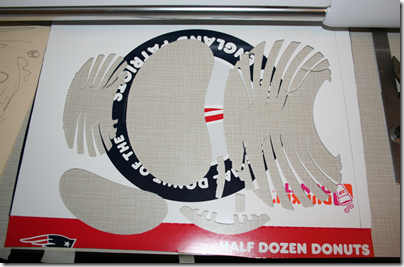 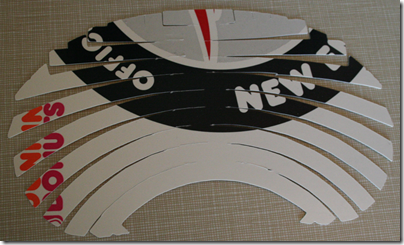 Assemble with many little pieces of tape 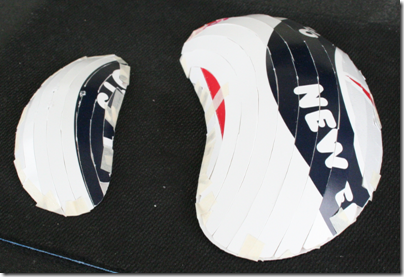 Make it out of watercolor paper instead of a donut box and you can bring it to a client meeting!  I have found frozen pizza boxes to be one of the most reliable materials.

This description was fast and dirty, so apologies if run into any snags on the the way. As with any toolset, each one has its own personality and quirks.  Pepakura and Inkscape are both really powerful and interesting in their own right and deserve deep investigation.  The Ecraft is a crazy machine that is often as frustrating as it is excellent.  Maybe I’ll do a post on how I MacGyvered the thing to use real pens. 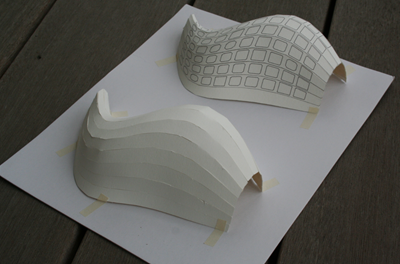